Anyone who develops MEP models in Revit knows that only face-based content works due to the limitations of working within the context of linked architectural and structural models. However, I find a lot of people do not know about a subtle issue that causes things like receptacles to move vertically at some point during the project. 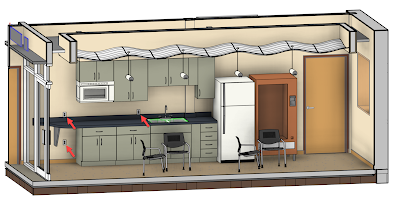 Read on to learn more...
Notice the three receptacles pointed out in the iamge above. They are also shown in the plan view below. Well, on a side note, two of them are shown. Because two are aligned vertically, you cannot see the lower one. The electrical content LHB developed, and sold by CTC Express Tools, has a really nice way to deal with this. Check out this previous post for more:

When a face-based family is placed, it can have a default offset relative to the floor (based on the current plan view) as shown in  the image below. 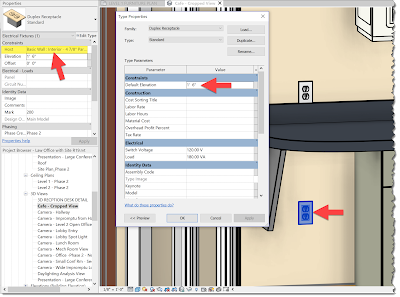 This same face-based content will maintain its position relative to the floor if the wall is adjusted, as shown in the next image, with one big exception! 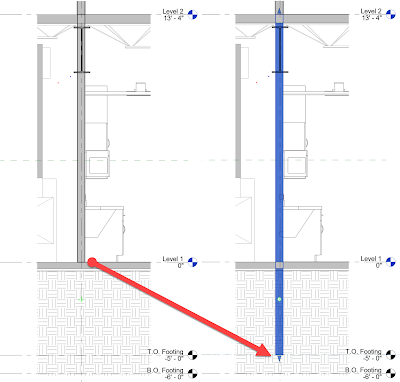 When the face-based family is placed on a linked wall, which is all the time for MEP, the content moves relative to the bottom of the wall as shown in the image below! This is very bad. 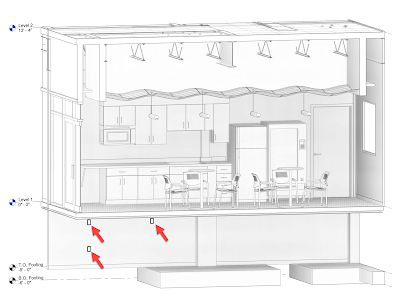 I see this happen when the exterior walls are tilt up precast and the consulting structural engineer realizes that, in northern Minnesota, where I live, frost is five feet deep mid-winter, so footings are often six feet deep. Thus, moving the footings and bottom of precast walls down sometime mid-project will cause all face-based MEP families (any FB families, really) to move as well. This can also happen if step footings are added along a sloped grade.

Another example is a new, or existing, building with various floor elevations at the same level. For example, at Level 1 a third of the plan is three steps lower to align with grade or another adjacent building.

This is something everyone, Architects, Interiors, Structural and MEP need to be aware of to prevent unwanted mistakes to be introduced into the project. In this case, communication is key! Because clash detection will likely not help here. 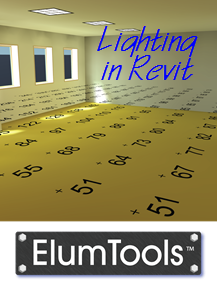 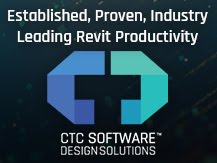 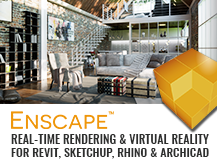